ICC’s International Maritime Bureau (IMB) has received the lowest number of reported incidents in the first half of each year since 1994, a testament to its pivotal role in raising awareness to make waters safer.

IMB Director Michael Howlett said: “This is not just good news for seafarers and the shipping industry, it is good news for trade which supports economic growth. . But the risk transfer zones and the maritime community must remain vigilant. We encourage governments and responding authorities to continue their patrols which create a deterrent effect. 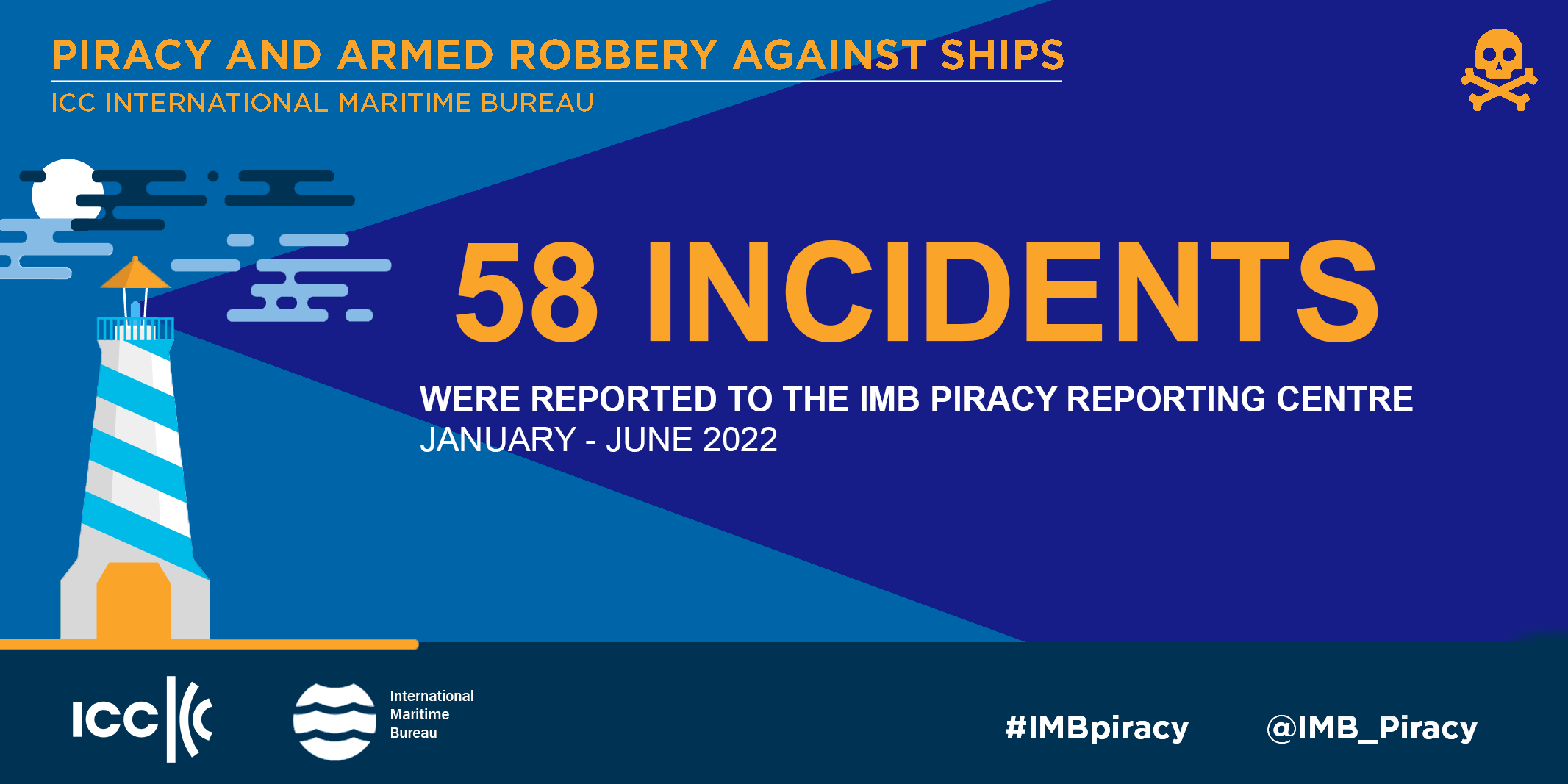 Upon being informed of the incident, the IMB PRC immediately alerted and contacted regional authorities and international warships to request assistance. An Italian Navy warship and its helicopter responded and immediately intervened, rescuing the crew and allowing the ship to proceed to safe harbor under escort. 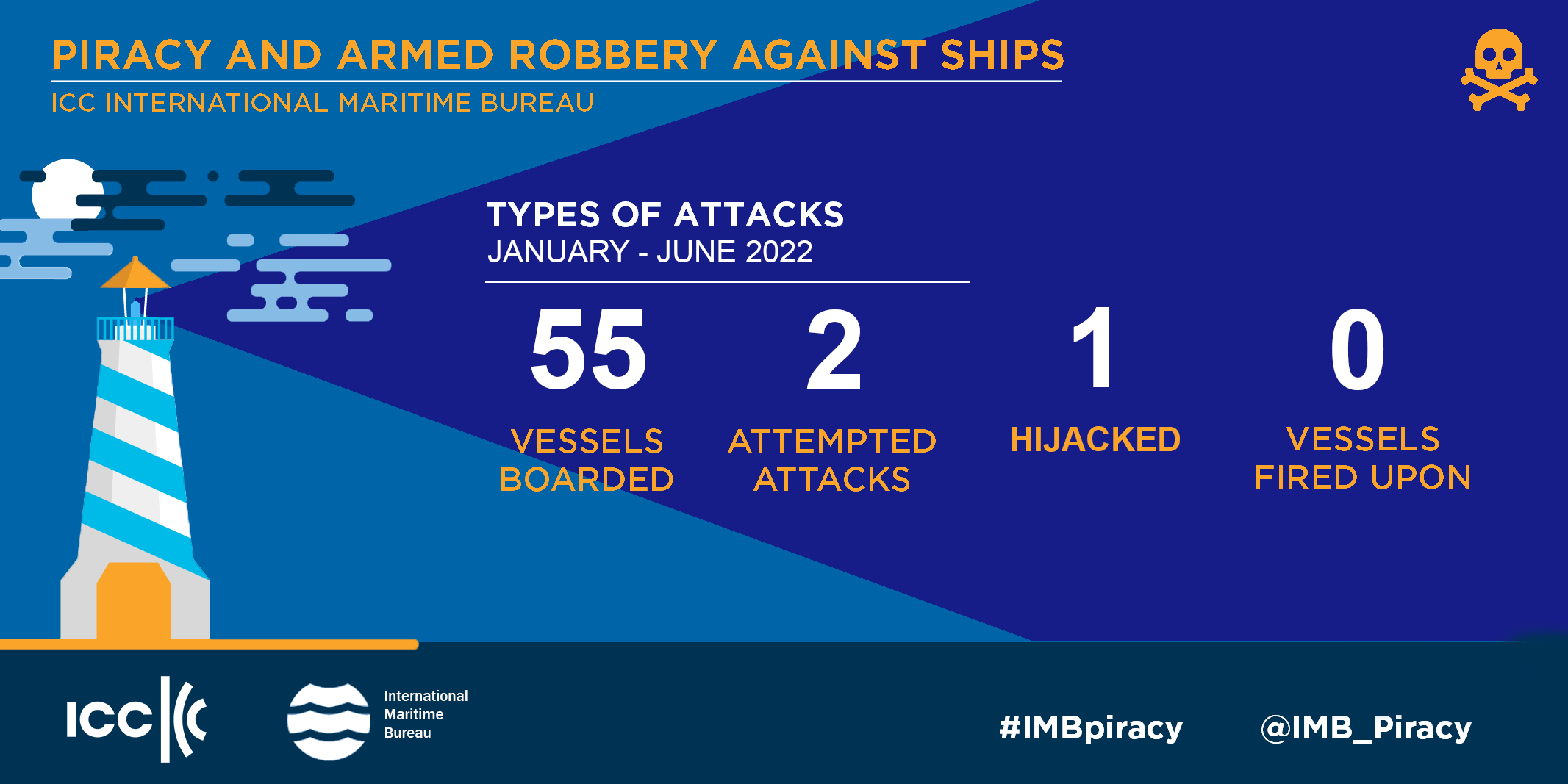 IMB PRC salutes the prompt and positive actions of the Italian Navy which undoubtedly saved the crew and the vessel. It urges coastal response agencies and independent international navies to continue their efforts to ensure that this crime is continuously dealt with in these waters which account for 74% of crews taken hostage worldwide.

Cautious gains in the Gulf of Guinea
Vessels continue to be targeted and boarded by local perpetrators as they pass through the Singapore Strait, which accounts for more than 25% of all reported incidents globally so far this year. The perpetrators successfully boarded the vessels in all 16 reported incidents. Although considered low level opportunistic crimes, crews continue to be at risk with reported weapons in at least six incidents. 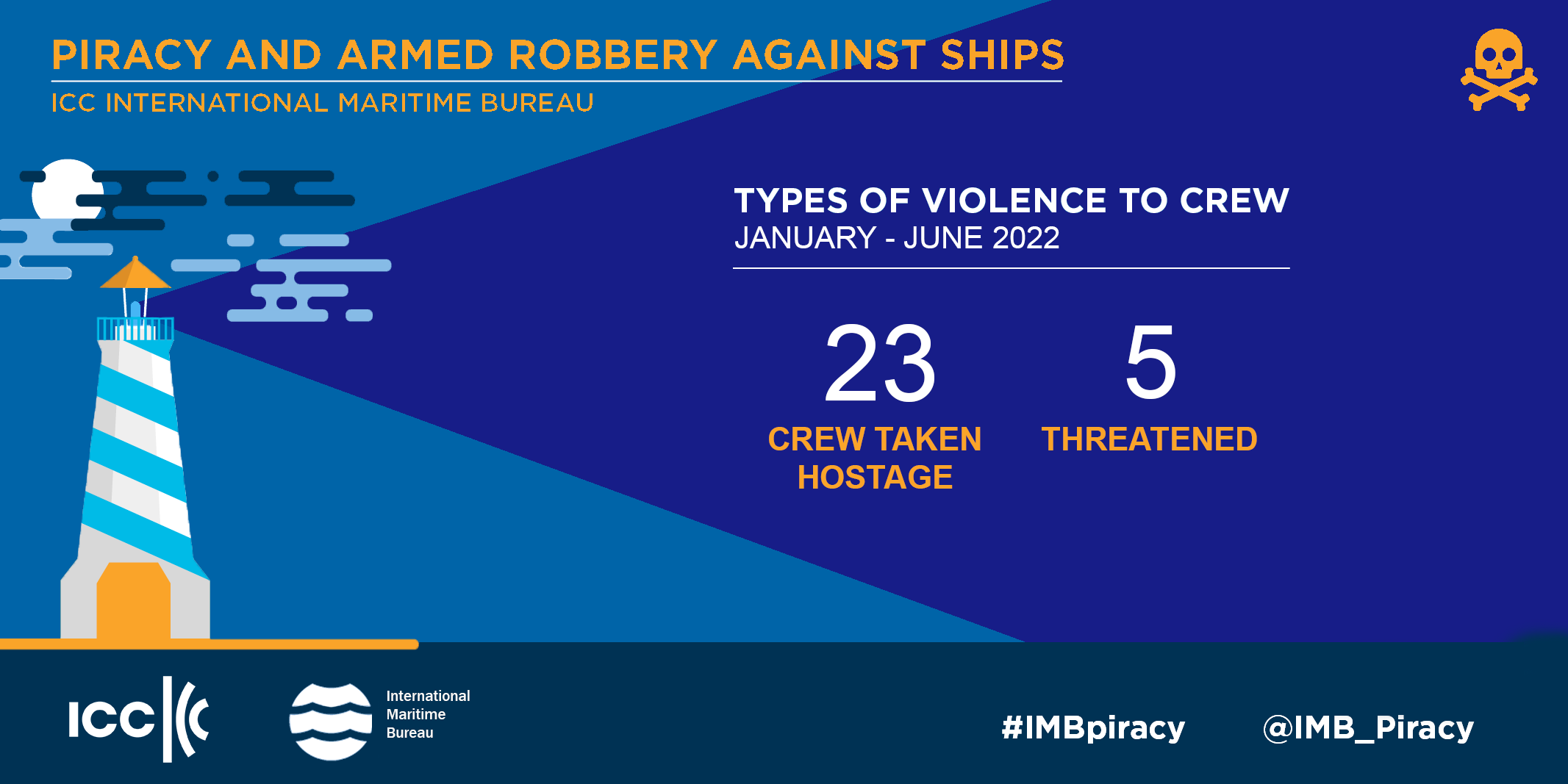 Outside the Singapore Strait, the Indonesian archipelago saw an uptick in reported incidents for the first time since 2018, with seven incidents reported compared to five during the same period last year. Five ships were boarded at anchor and one each while the ships were docked and steaming. Weapons were reported in at least three incidents with a crew reported being threatened. 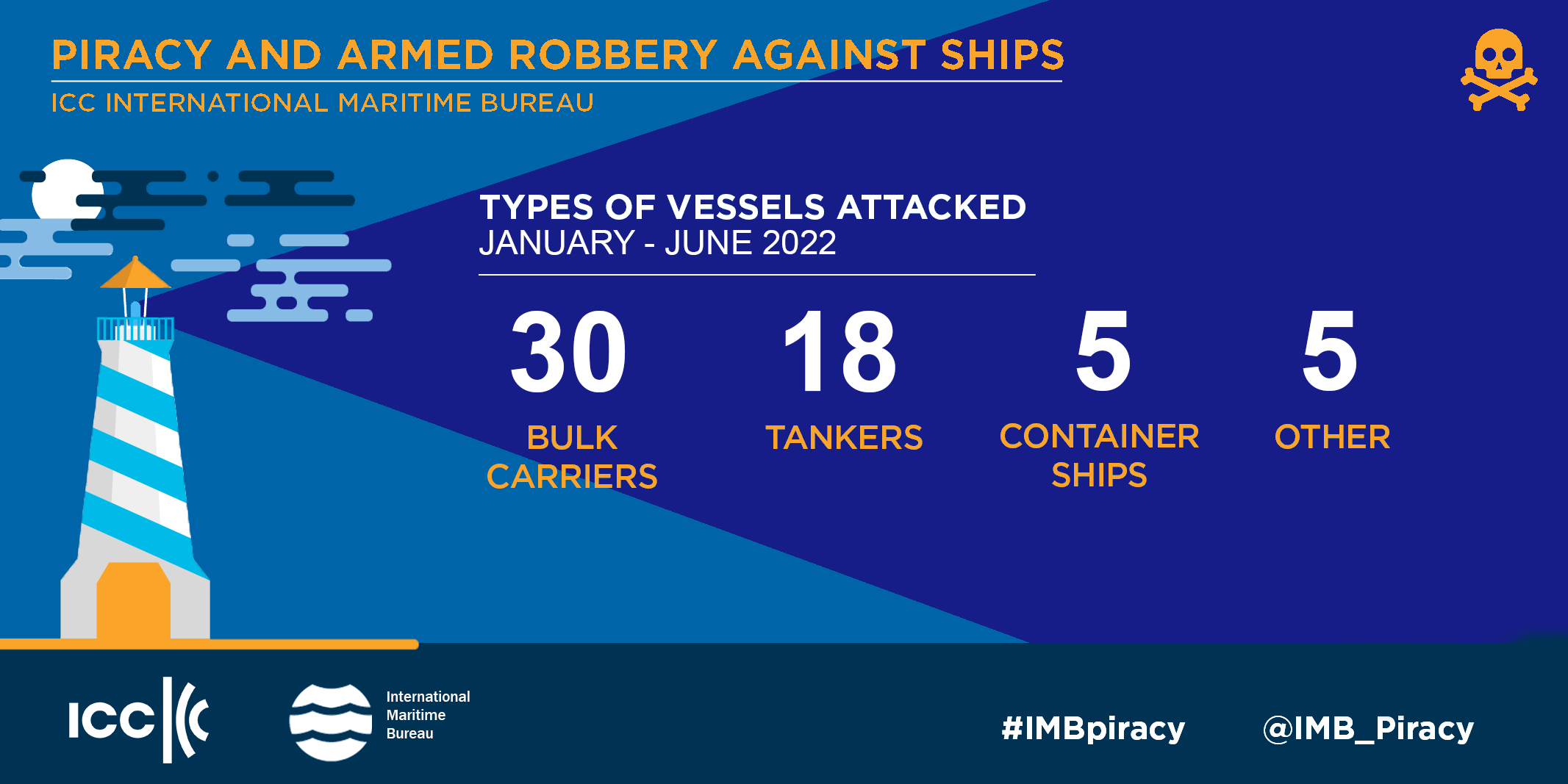 The threat remains in the Gulf of Aden
Although no incidents have been reported there since the beginning of the year, the threat of piracy still exists in the waters off the southern Red Sea and in the Gulf of Aden, which includes the Yemeni and Somalis. Although the chance of incidents has diminished, Somali pirates continue to possess the ability and capacity to conduct incidents, and all merchant vessels are urged to adhere to the recommendations of the latest best management practices, while transiting these waters. . 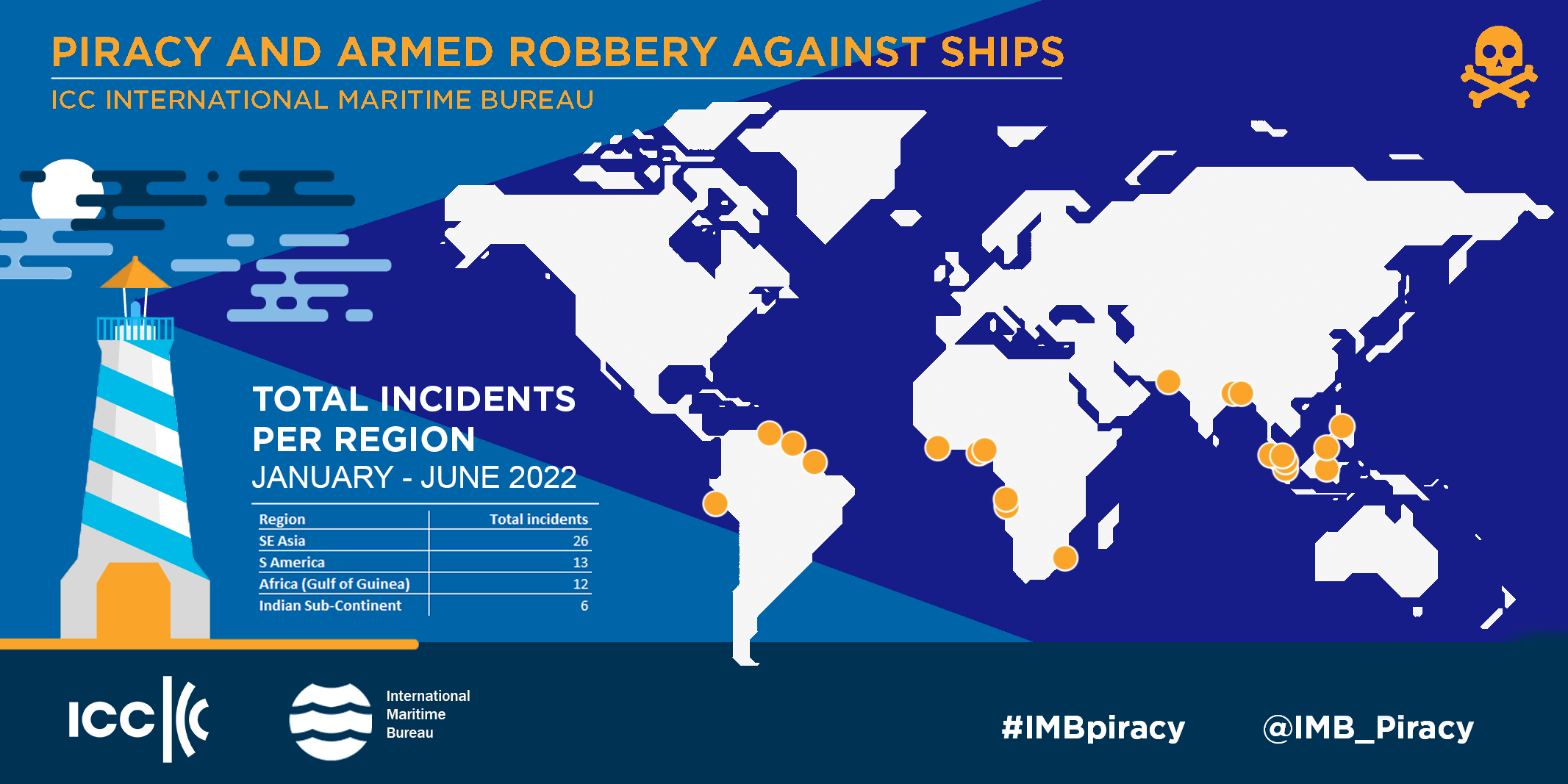 MB Hacking Reporting Center
Founded at a time when seafarers had few options for reporting incidents, IMB PRC remains a single point of contact for reporting all crimes of maritime piracy and armed robbery, 24 hours a day. Since 1991, their prompt transmission of reports and liaison with response agencies, broadcasts to expeditions via GMDSS safety net services and email alerts to CSOs, all provided free of charge, have helped combat piracy. and armed robbery around the world. 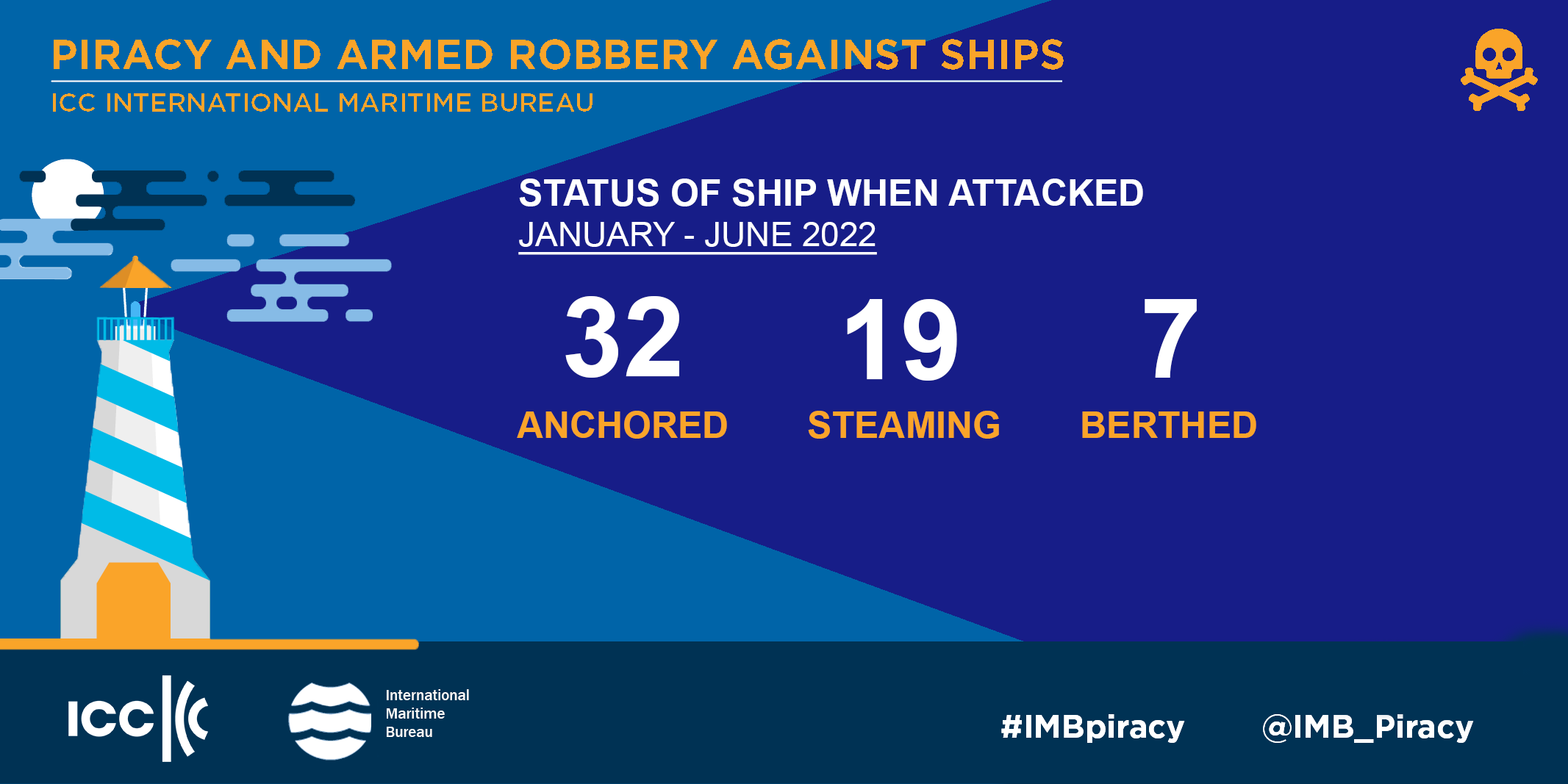 As evidenced by the establishment of multiple regional cooperation, reporting and response mechanisms, his reports have over time increased awareness, resulting in the allocation of adequate resources to make waters safer.
Source: ICC International Maritime Bureau