Labor issues at cargo ports could prolong bottlenecks and temporarily reduce volumes, according to Fitch Ratings. Global ports are susceptible to work-related disruptions as they are still clearing residual pandemic-related backlogs as shippers enter their peak season. However, stable and contractually guaranteed revenues and solid liquidity will limit the effects on port credit profiles.

In the United States, the International Longshore and Warehouse Union (ILWU) and the Pacific Maritime Association (PMA) continue to negotiate a new contract after their previous contract expired on July 1. Both parties announced that the operations would continue, despite the lack of an agreement. to a contract extension, but the risk of disruption remains until an agreement has been reached. The negotiations involve 29 West Coast ports, the largest of which are the Port of Los Angeles (POLA) and the Port of Long Beach (POLB), which together handle about 30% of container volume in the United States. The main bargaining points are wage increases and automation of cargo handling. No date for the end of negotiations is set, but market reports indicate that a new contract could be in place by August or September.

Twenty-foot equivalent units (TEUs) at U.S. ports remain high this year compared to 2019 and early 2020, and import volumes from U.S. ports are expected to increase as retailers stock up for back-to-school and holiday season sales. Stronger volume growth for East Coast ports from 3Q21 is the result of shippers redirecting some cargo from West Coast ports to avoid congestion and adjust ahead of contract negotiations. TEUs at East Coast and West Coast ports increased by 9.9% and 0.4%, respectively, this year through May 2022 compared to the same period in 2021.

Industrial actions staged during previous ILWU contract negotiations have caused delays in the processing of goods and resulted in fluctuating port volumes. A breakdown in negotiations between the ILWU and the PMA in 2002 led to a lockout of 29 West Coast ports that ended after 10 days when President Bush intervened with an injunction. Similarly, in 2015, PMA ports were congested for nearly four months due to deadlock in renegotiations, necessitating the intervention of the Obama administration. 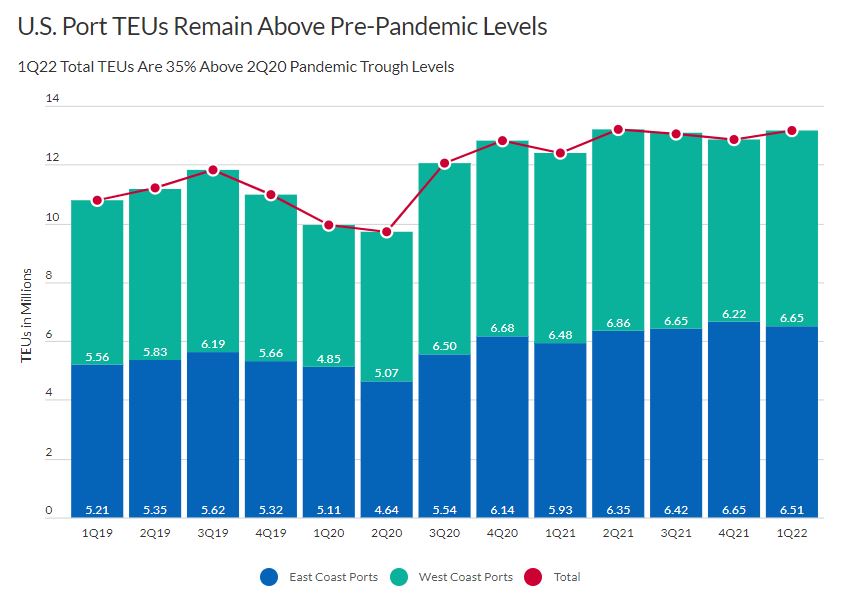 Despite short-term volume fluctuations following these past disruptions, U.S. ports’ credit ratings are generally unaffected due to the insulating nature of the port’s long-term contracts with terminal operators, coupled with d substantial cash reserves. POLA and POLB both benefit from more than 1,200 days of liquidity and minimum annual guarantees representing 70% and 85% of operating income in fiscal 2021, respectively.

The most significant and longer-term credit risk is the ability of shippers to shift their operations from West Coast gateways to other ports to avoid the real and perceived dangers of future operational disruptions due to social unrest. However, US West Coast ports aren’t the only ones facing labor issues. The Port of Montreal experienced major labor disruptions in 2021, due to strikes by stevedores, and Charleston, on the US east coast, is facing operations below capacity due to a dispute with the International Longshoremen’s Association regarding the relocation of carriers.

Industrial action in Europe is exacerbating congestion problems at ports in the UK, the Netherlands, Germany and Belgium. In Germany, recent port strikes have slowed export trade as unions seek an automatic annual inflation adjustment in renewed contracts. Similarly, in Belgium, nationwide strikes in May and June slowed down operations at the already congested terminals in Antwerp, worsening existing bottlenecks.

Global port congestion and elevated shipping rates are expected to persist through 2023 with continued uncertainty in the supply chain. This dynamic gives workers more leverage in negotiations, and higher wages under new contracts could increase shipping costs and change competitive dynamics over time.
Source: Fitch Ratings

Russia is competing with Iran and Venezuela ...